Where is the Button to #reset Our World for a Bright New Norm? 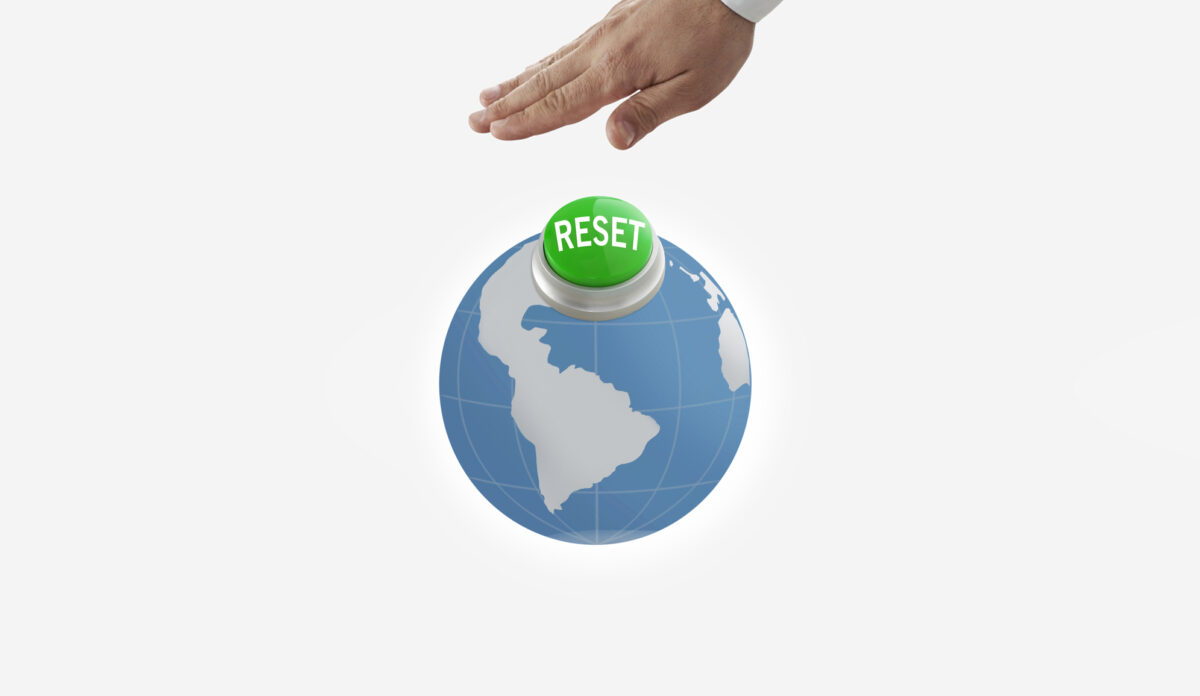 I spent a large part of my early life just wanting to be normal, to fit in and be accepted. Back then it seemed that I, along with many of my immediate family, did not fit in to the world we inhabited. There was always something that made us stand out. From our hand knitted school jumpers to being the only child who’s mother could change the wheel of a car, and her “you can take me as you find me” attitude meant that whatever group I was trying to be part of left me feeling like the outsider, the “square peg in the round hole”. I concluded years later that “normal” equated to “that which I have acceptance for”. So, however different, unique, strange, or downright weird I was perceived to be, I endeavored to celebrate it rather than hide under a rock of shame. I have to say that I was not that proficient at living from this awareness and it took many years to find acceptance for who I am. Even now I occasionally bump into something that needs embracing, accepting, and integrating into my world at large.

So now each day we wake to a world that does not resemble the one we lived in only seven or eight months ago. Now our world is anything but normal. It is hard to be sure of anything these days apart from what is directly before us or what we are feeling in this precise moment. I often wonder how my late parents would assess our world today. If only they were able to come back for the afternoon and take a look. Probably, only their generation who lived through World War II could make any sort of comparison to what we are experiencing today.

Finger pointing blame is rife wherever you look and it is easy to get sucked in. Yet, who is to blame and what are they to blame for? In seeking personal responsibility, we may find we blame others less. However personal responsibility can easily slip into self-blame. Punishment can be instantaneous when accusation to execution may only be a breath away.

The old way has been decommissioned, the terrain is unchartered and the new has yet to be established. Life seems to have become a strange board game without instruction, where the players, without option are making up the rules each time they pick up the dice. There is a strange feeling in the air; a feeling that normally accompanies the time between death of someone significant and the funeral where we get to say our final goodbye. During such time it’s feels like life has hit the pause button. Now the world is caught in a parallel experience, waiting, unaware of what is to come or when it will happen and once again the pause button is firmly locked on.   The word on the street… “When will it all return to normal”, is sandwiched between the hope of the dawning of a new age and the fear it’s the beginning of the end of the world.

As a young child I was perplexed by two major questions; why do so many old people die alone and why are there so many children in orphanages?  How far have we come, how far have we fallen from the dreams and aspirations of that child who only wanted to make the world a better place? What if we had a chance to press the #reset button, to return our world to factory settings? I doubt that many have much idea of what those original settings were. Even less awareness of the viruses that have twisted our innocent aspirations into unrecognisable corruptions of the programs we were all encouraged to download.

What if we have got it all wrong? What if the conclusions that we have made about life, love and the pursuit of happiness were fundamentally incorrect? Maybe now is a good time to put everything under the microscope and evaluate what truly matters and what is intrinsically true for each of us in turn. Earlier this year it was widely reported that if we took 3% of the American military budget, we could end world starvation.  Being that hunger and malnutrition are the greatest cause of death on this planet, it seems that something here is fundamentally messed up!

Historically the world has been orchestrated by guilt and blame, pointing fingers at one another, and bludgeoning the accused with a mallet of shame. To this day that approach continues universally and universally continues not to work. So maybe, once again, another reason to hit the #reset button and start asking some soul-searching questions to the person you see in the mirror.

So, what is the answer?  Well, what is the question?  To define the question do we first not have to define our intention and motivation? They say every cloud has a silver lining and if you look closely you might see how well that lining has been sewn into place. I have been waiting for something to come along and fundamentally change the trajectory of our world. I feared what that might look like. Now my fear is evenly woven with hope that maybe, at last, we have found a way to change the wheel of the car while it is careers down the road.

I could stop now, preferring to leave everyone, including myself, to start their own process of re-evaluation. Yet, where does one start such a monumental #reset? I have often thought that the most powerful statement in learning or doing something differently is “I don’t know” because from that place, there is something to be attained outside of what we have already gathered. From “I don’t know” there is hopefully a willingness found within to invite enquiry,  for the seeking of answers and the subsequent understanding that will enable us to live a more fulfilled, expansive life with more integrity and harmony. Whereas, staying in what we know just reinforces more of the same, which could go a long way to explaining why we are in such a catastrophic mess. Even today children are taught facts and information, unwittingly programmed to believe that success is their ability to catalogue what is being fed to them. No wonder the automatic response of an adolescent is often “Yeh, I know” when trying to explain something to them. “Yeh, I know” is a fear reaction, one that stops learning before it is given a chance. Imagine how much greater a child’s ability to learn would be if they felt completely safe and comfortable with not knowing.

So, from this unchartered territory that many are now calling the “new norm”, maybe we can establish what is true, from what we have historically subscribed to as truth. What would be left if we were able to press the button and reset our world? What would we actually know? What if anything from the old world would we like to include? Stop and ask yourself right now; what is it that I fundamentally know in this moment.

Each and everyday day starts and finishes with oneself. We are the first one we greet and the last one we leave. We know more about that person in the mirror than anyone else does. Of all the important people in your life where does the person in the mirror come on your list.  Treat today as if it is the first day of your new life in this new world. How do you want to live it? Remember that we are both our own saviour and our own saboteur.

Maybe its time to rewrite the rules of the game so that whatever the roll of the dice, we win. So now, all we must decide is what constitutes “the winning game”.

If you feel like you would like some help defining the rules of your game, please get in touch. I work both face to face and remotely via Zoom, What’s App and Phone. I always offer a free initial 15 mins phone consultation to see if I can be of help and assistance to you

The Complexity of Compromise